Ireland’s Dean Kearney took top honours at a pulsating opening round to the 2009 Prodrift Super Series., Donnington Park UK. The 21 year old driving the Maxxis Tyres Nissan Onevia defeated all before him to claim his second career victory amongst a grid of top drifting talent from the UK & Ireland. 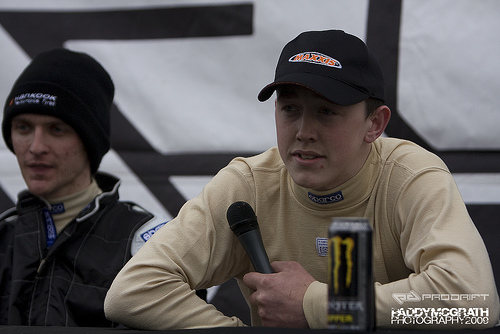 Although drifting has previously taken place at Donnington Park, this was the first time that the competition had been set up away from the conventional track. A large area of asphalt situated to the rear of Turn 1 of the Grand Prix circuit was of sufficient size to create an exciting drift layout that encouraged entry speeds of over 95mph followed by a series of flowing curves that weaved in front of the spectating public.The Prodrift Super Series is a new competition format for 2009 that will gather the best Pro class drifting talent from the UK & Ireland across a 5 round championship with events staged in both countries. Following this event, the Prodrift Super Series heads to Ireland for a similar style track at Punchestown before hitting Croft & Lydden Hill (UK) and then finishing up at Irelands largest Japanese tuning festival – Japfest, Mondello Park, in September. All eyes were on Donnington however for the opening Round and with the British Drift Championship taking centre stage on Saturday, the main event on Easter Sunday was guaranteed to deliver a grid full of Irish and UK talent. The first event of the year also brought with it many changes to team setups, personnel and machinery. Manchester based Team Japspeed were returning to 2009 with massive expectations. Two RB powered Silvia S15’s replacing the trusty R33 Skylines that were terminally damaged at Silverstone in 2008 and all cars running on the Maxxis Z1 Drift tyre for the 2009 season. UK drifting specialists Driftworks were also present in new metal. 2008 EDC champion Bon Bon had ditched the Toyota Chaser and defected to the Prodrift Super Series driving the all new and improved Driftworks R32 Skyline powered by the 1JZ heart of a Toyota. Travelling from Ireland, Team WKD Imports arrived courtesy of a new team transport unit housing the 3 car team. For 2009 WKD will run Nigel Colfer and Johnny Power in similar Nissan 180sx with Wesley Keating also set to make appearances for the Carlow based team.

Qualifying: Having made some adjustments to the BDC track layout, the Prodrift Judges required competitors to take an alternative line to what was required on Saturday. Outside clipping points on many of the fastest corners meant that the fastest line through the corner was sacrificed in exchange for a spectacular wider line. Many of the drivers struggled with this outer line in early practice, but experienced competitors such as Bon Bon, Dean Kearney, Johnny Power, Pete Barber and Gavin Lenihan made light work of the new layout and as such were seen as favourites heading into the all important afternoon battles.

Top 16: The Top16 was a perfect split of the nations and contained 8 Irish and 8 UK Drivers. UK hero Bon Bon got things off to an ideal start for the home supporters with a comprehensive defeat of UK up and coming talent Steven Moore. Surprises were to follow however as both Johnny P and Pete Barber (Qualifiers 2 & 3) were eliminated by Alan Sinott and Dean Kearney respectively. Steve Biagini, Matt Carter & John Calvert were also eliminated at the Top 16 level, meaning that the Irish drivers took 5 of the available 8 positions in the Top 8 Battles.

Top 8: The Driftworks Skyline of Bon Bon was made work twice as hard in his Top 8 encounter with Paul Cheshire. The Team Green driver forced a sudden death decider with the EDC champ but the elation was short lived as Cheshire suffered a 10-0 defeat in the ‘one more time’ battle and Bonatron in his smoking Driftworks skyline proceeded to the semi finals. Joining Bon Bon in the semi finals was the powerful Silvia of Gavin Lenihan. His narrow defeat of John O’Connell (BMW E30) meant that the Donnington crowd were guaranteed to see the 2 most powerful vehicles in the field battle for a place in the final. On the other half of the draw table, Dean Kearney defeated fellow Maxxis Tyre competitor Danny Eyles with consecutive 6-4 scores; Eyles’ exit from the competition spelled the end of competition for Team Japspeed. Joining Kearney in the Semi Final was Irelands Alan Lenihan, the Hankook leading driver survived a determined effort from Alan Sinott in his SR20 powered Trueno. 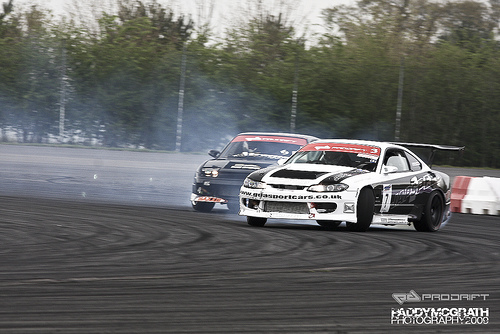 Semi Finals: Predictably, the first semi Final of Gavin Lenihan Versus Bon Bon was a tight, but spectacular, affair. Alternating 6-4 results in the first battle meant that the Donnington audience were treated to this pair going at it again. The Sudden death battle appeared to be heading in the advantage of BonBon but a blistering second pass through the course by Gavin Lenihan reversed the scoreline and it was the Irish man that took the first available spot in the Round 1 final. Subsequently it was discovered that the Driftworks Skyline had developed a fuelling issue and Bon Bon retired from competition, unable to contest the consolation round for third position. The remaining place in the Final was contested between the Maxxis shod Nissan Onevia of Dean Kearney and team Hankook’s Alan Lenihan. This semi final was not as eventful as the previous as Kearney made light work of the Hankook Silvia. Consecutive 7-3’s in favour of the Maxxis Nissan meant that the Lenihan family were denied a brotherly final and Kearney marched on. 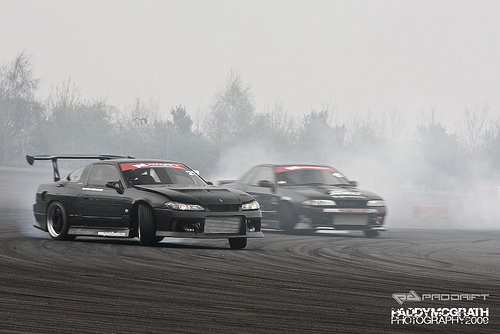 Final: The Final of the opening event of the year was set up to be a thriller, both Kearney and Gavin Lenihan had looked unstoppable in all of their previous battles. Kearney was coming off consecutive podiums in the latter events of 2008, for Lenihan this was his first ever Final. What was set up to entertain ended in somewhat of an anti-climax. With Lenihan leading into turn 1 on the first run, he appeared to carry too much speed and over shot the first bend, going off course and allowing Kearney to overtake. This handed a massive 9-1 advantage to Kearney meaning that if run 2 was kept to a formality, Kearney would prevail. Lenihan had other ideas however, knowing that a reversal of the score was required he pushed for an overtake on the exit of turn 1, and succeeded. Kearney was caught knapping, both cars finished out the course and the judges were left to deliberate. The decision was made that Lenihans overtake occurred on a section of track where the judges specified a wide line and that shallow driving would be penalised. With this in mind, Lenihans overtake was deemed illegal, the score was not reversed and Kearney took the Round 1 glory.

Press Conference: New to the Prodrift events in 09 is a post event press conference with the Top 4 drivers. This allowed us to ask the awkward question of Gavin Lenihan, what happened in the Final? “We came in too hot” was the simple explanation from Lenihan, visibly unhappy with the result (or the question?). Lenihan did remain upbeat about the performance overall however explaining that this was his first time competing abroad and that he enjoyed the competition and the track layout. Kearney on the other hand was a picture of relief, proudly donning his new Maxxis Tyres cap he knew that this was a fortuitous victory. “for the Top 16 we had a problem with our clutch…and had to flat change every gear” explained the 21 year old. Couple this with a car that had to be towed from the finish line and Kearney and his team will accept this victory with open arms. The result leaves the Championship finely balanced as the Super Series heads to Punchestown Ireland for Round 2 in May. With points allocated for Qualifying Positions (1st through 8th), it means that Kearney, Lenihan and BonBon will all be back on track fighting to hold onto every championship point. 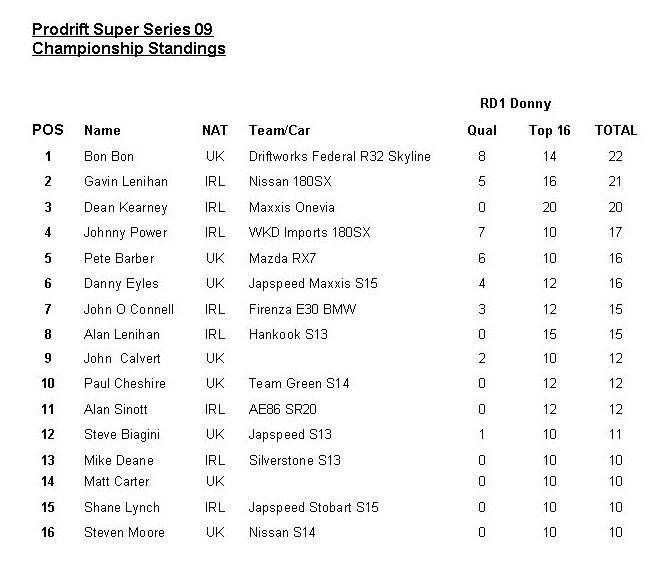