It was V8 power that won the day at Silverstone in the form of Alan McCord’s Nissan S15, after a day of high-speed first corner entries and a fair amount of gravel thrown in for good measure. It was McCord’s first win of the season and the final against Brett Castle was also the first time that the pair had met in competition. Castle had looked strong throughout the day and it promised to be a close final, but an insane angle at even crazier speeds on his first leading run was just too much, the resulting trip to the kitty litter handing McCord an unassailable 10-0 advantage. “That’s my first win of EDC and first time against Brett,” said Northern Irish McCord afterward, “it’s a pity he spun as it would have been a great close battle, but I’m chuffed with the result”.

With two new drivers thrown into the mix at the beginning of the day and with Phil Morrison pulling out with a knackered engine after the qualifying session, only two drivers were denied a bye into the final sixteen; Paul Conlan and Paul Cheshire. Despite going evens in their second run, Conlan’s high power pursuit in the first led him to spin, meaning Cheshire’s borrowed S14 went through (his own S14 having suffered gearbox failure during practice). Cheshire though went on to suffer a similar fate to Conlan in the final sixteen, hitting the gravel in his second run against the gold R32 Skyline of David Monaghan as he took a defensive line through Luffield. Despite winning the first run 6-4, Cheshire’s zero points for the foray into the gravel saw Monaghan cruise through.

Scotsman Kieran Cameron drops the Apex machine in the gravel

There were no other spins in the battle for the last eight places, although Declan Hicks clipped the gravel in his second run against Robin Neeson to help the Toyota Chaser driver level things up. Running for one more time the drivers each took the opportunity to run the other close but Hicks just edged it, partly thanks to his big commitments into the first corner. Newcomers to the series, Stewart Hansford in a black S13 and Keith Hammond in a blue R32 Skyline also impressed. Hammond had a tough tie up against Mark Luney in his debut battle but forced it into extra runs, although Luney’s second leading run saw him pull some distance between the two to take a useful 7-3 lead. Luney then pulled some big angles on his second chasing run to add a 6-4 victory to that and progress to the last eight.

Hansford also had a tough opponent in the shape of Round 2’s second place driver James Russell. In his chasing run the judges scored Hansford a 6-4 win which Russell then duplicated when it was his turn to eat smoke. One more time and the first run was judged to be even, so it was all credit to the newcomer when he managed to hold Russell at bay in the final pass to squeeze through to the next round with a 6-4 win. He would go on to meet the winner of Ian Harrison versus Kieran Cameron, a battle that Harrison nailed in the first run having overtaken Cameron through the first corner. Despite an even second run, that previous effort was enough to set Harrison up against Hansford. Meanwhile Castle was pitted against Gary Hughes, which was unfortunate for Hughes as Castle looked on fire at his local circuit. Hughes did nothing wrong but Castle started to pull away on his lead run and then threw in some crazy angles and a strong transition in his next to take both runs by a 6-4 margin. McCord scored the same as Castle in his battle with BMW M3 Turbo driver Steve Will, and virtually duplicated his tactics with a gap forged on his lead run and a bumper hanging display on the next. Again, Will did nothing wrong but came up against a driver with the bit very much between his teeth.

The only remaining last sixteen tie was between Round 2 winner Pete Barber and Andrew Cooper in the white S14a. Cooper put in a fine chasing run but had to straighten a little to avoid contact with Barber who was taking the inside line as they entered the long right hander side by side. The judges ruled that run 5-5, but Barber who was piloting an older, borrowed FC RX-7 stormed his chasing run to narrowly go through with a 6-4 win. So the quarter finals were set with Monaghan versus Barber, Hicks versus Castle, Harrison versus Hansford and Luney versus McCord all for the Silverstone crowds to look forward to.

After spinning in his practice run and losing his front bumper in the process, Monaghan couldn’t hold Barber off as they came to the end of the first run, just being overtaken towards the end. Barber led his run with a 92mph fling into the first corner, which Monaghan did brilliantly to keep up with. The Skyline driver couldn’t close the gap though which kept the run evens and meant Barber’s earlier 7-3 win saw him through to the semis. Hicks came out with Castle on their practice run but cruised the course rather than sending the rear tyres smoking. Hicks defended well on the first run, forcing Castle to take some dirt in the process, but Castle hit the course hard on the next and pulled a gap to even things out. One more time and Hicks entered the first bend at 98mph… straight into the gravel. Having replaced all six spark plugs earlier in the day after only firing on five, Hicks claimed the extra 80bhp it released made the car a different beast and played a big part in the incident. He still came back out to hang on Castle’s rear bumper but the damage was already done and Castle was through. Newcomer Hansford’s day got even better as both runs against Harrison saw him scoop maximum points. Harrison span on his lead run and looked to make up for it in his following battle by searching for a way to overtake the S13 on the inside of bend one. He pushed too hard though and span again, forcing Hansford into a fine avoidance manoeuvre and handing him a place in the final four. The last quarter final saw the two talents of McCord and Luney pitched against each other with the first run showing the big angle, tyre smoking action the crowds had come to see. Luney went into the second run with a 6-4 advantage and only had to stick to McCord’s rear to go through. Ever the crowd-pleaser though, Luney pushed harder than perhaps he should have, going wide into Luffied as a result and suffering the consequences. The judges scored 7-3 in McCord’s favour, claiming Luney’s error was just too large, putting the V8 Silvia against Hansford’s S13 in the semis.

And it was here that Hansford’s dream debut came to an end. Hansford just couldn’t hold McCord off on the first run as the pair hit the latter section of the course side by side, scoring McCord a 7-3 victory. McCord went on to power through his leading run and Hansford again struggled for pace, which placed McCord firmly in the final. His opponent would be Castle, a driver who almost overtook his RX-7 driving rival Barber in the first run of the other semi. His pressure forced Barber into straightening up a little into the final bend to give him the points majority, and he then went on to put up a wall of smoke in front of Barber on his leading run to clinch a passage to the last two. In the Barber versus Hansford battle for third place, Barber once more proved to be the king of rotary powered drifting, where despite close runs his flawless displays in the unfamiliar car won him the day. For Hansford though it was still a very respectable result.

Entries into the first corner maxed out at 95mph!

But it was the final of Castle versus McCord that the crowds were itching to see, both drivers having looked on song throughout the day. It promised to be a hard fought final, but Castle just overcooked things into the first run and filled the air with gravel dust. After being pulled out of the kitty litter he did his best to force McCord into an error from behind on the second run, but it wasn’t going to happen. As the roar of the V8 crossed the finish line it sounded McCord’s first Need For Speed European Drift Championship win and in the process put him level on points for the season with Barber. With three rounds left to compete in though, there are still a number of drivers who will be aiming to topple McCord and Barber from the top, the reverse track at Brands Hatch on 28th June being their next opportunity. 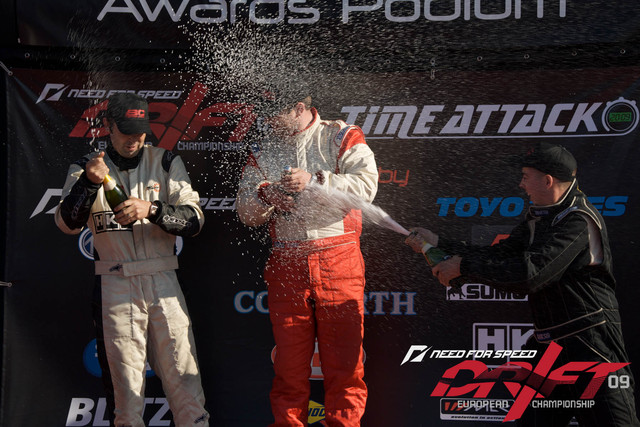 Phil Morrison takes EDC Round One