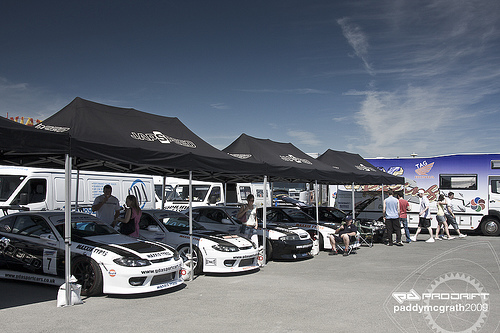 The return of professional drifting to Punchestown was possibly the most anticipated Prodrift event of the 2009 schedule. In 2006, this venue was the first to host a custom built course and challenged a grid of international drivers, for 2009 this reputation would be repeated. Internationally known for thoroughbred horse racing, on a sun soaked bank holiday weekend the Kildare venue would cater for horse power of a different nature as the Prodrift Ireland and Prodrift Super Series rolled into town.

For 2009 the layout of the Punchestown course had changed dramatically. The regular blind off-camber entry remained but was this time followed by a very long sweeping left hand curve close to the temporary wall followed by a series of second gear turns before returning to the outer sweep this time in a clockwise direction. From early morning it was clear that the new layout and the outer clipping zones were proving a stern challenge to the pro class field of the Super Series. Mixing it with the field of Irish pro class drifters were many of the UK’s top drivers and teams. Japspeed travelled in force with no less than 4 cars. Sklyine Part’s Anthony Scott was also in attendance with the distinctive Rocket Bunny S13 and Driftworks champion Bon Bon made a late arrival following major motor surgery to the Toyota powered R32 Skyline. With unrelenting sunshine and a packed venue, the scene was set for a memorable days drifting. 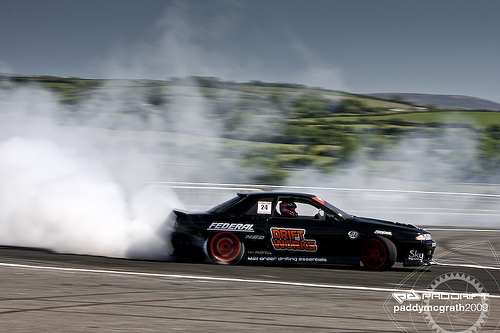 Early morning practice offered a good indication of who was capable of mastering the Punchestown course. The usual suspects seemed to take the technical layout in their stride. Shane Lynch in the Japspeed Stobart S15 looked impressive immediately as did his team mate Danny Eyles, both cars with adequate power and performance to handle the course. Irelands Martin Ffrench, who had made overnight gearing adjustments, also looked comfortable and Prodrift European Champion James Deane, revealing his brand new Mazda RX7, was improving with every pass. 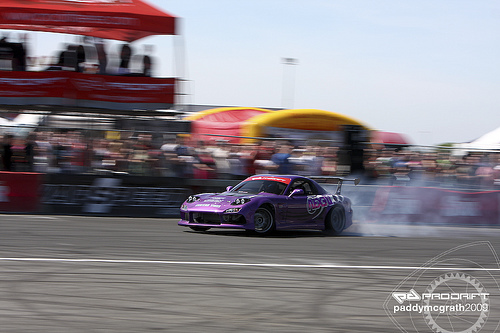 Super Lap The field was thinned to 16 with preliminary qualifying prior to the Prodrift Super Lap. Notable absentees at this stage were Eric O’Sullivan who struggled to adapt to the borrowed AE86 of ROCO Performance and Shane Lynch whose qualifying passes failed to match those of practice. Johnny Power of Team WKD was top of the preliminary qualifiers and as a result set the marker as the first car to enter the Super Lap. Powers’ score of 25.5 out of 30 meant that the Waterford driver remained in the control tower as the next 9 drivers failed to match that score. Eventually, Power was un-seated by an unlikely competitor. Tommy McDonagh driving the Cosworth Powered Volvo delivered a stunning run which earned him 26 points from the maximum 30 and he replaced the WKD driver as top scorer. McDonagh’s tenure at the top of the tower was kept to a minimum however as the next pass of the course by John Paul McCarthy in the Barry Motorsport M£ BMW removed the Volvo from the top spot with a remarkable pass of 28/30. The high revving yellow beemer had delivered a run that left both the judges and capacity audience applauding. McCarthy remained in top spot for the remaining runs as established pro’s such as Nigel Colfer, Martin Ffrench , Bon Bon & James Deane failed to match this score and McCarthy entered the Top 16 battles as the number one seed. 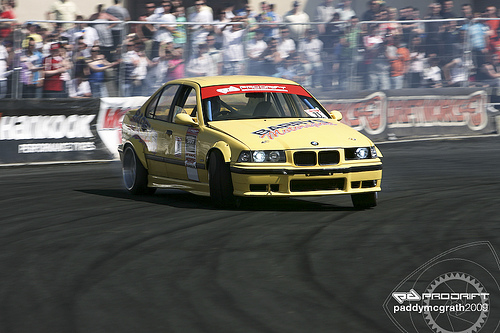 TOP 16 Following a well deserved break from the Irish sunshine, the drivers returned to the track for the Top16 elimination battles of Super Series Round 2. Kicking things off was John Paul McCarthy versus 16th Qualifier Steve ‘Baggsy’ Biagioni in the Japspeed S13. Although McCarthy appeared to dominate the leading runs, his over aggression whilst following the current British Drift Championship leader led to contact – a mistake which ultimately resulted in his elimination from the event. The top qualifier was out and Baggsy was moving on – this was to be the first of many upsets in the Punchestown Top16. 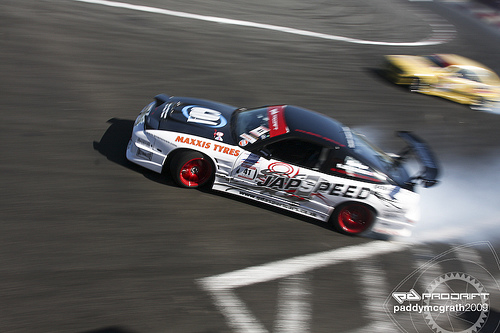 Crowd favourite Martin Ffrench was next to take to the circuit and he made light work of Christy Carpenter, the latter again competing in a T-Car, his brand new S15 fell short of completion for Punchestown. Maxxis sponsored Dean Kearney (winner of round 1) was experiencing technical issues all weekend and this culminated in a disappointing elimination from Top 16 at the hands of a solid Alan Lenihan driving the Hankook S13. Team Japspeeds other Top 16 driver, Danny Eyeles enjoyed a free ride to the Top 8 following retirement from the competition by Nigel Colfer, his brand new WKD imports Nissan experiencing terminal teething problems. Johnny Power faced his WKD team boss Wesley Keating in the 5th Top 16 match, Keating who was making his first real attempt at Pro class competition. Although Power appeared to have the victory secured an error which saw the Waterford driver drive off-course handed an easy passage to the Top8 for Keating. 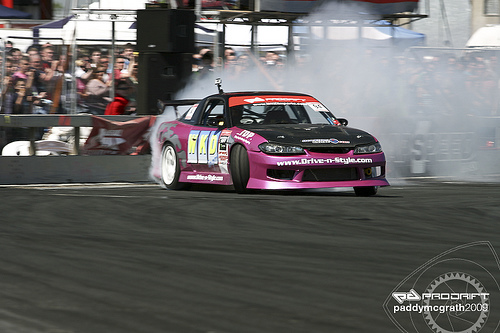 The new Nexen Mazda RX7 of James Deane also fell foul of debut gremlins as he failed to make the startline of the Top 16. Differential problems eliminated the Prodrift Champion and his opponent Dan Moorehead was granted a pass to the Top 8. UK champ Bon Bon was made work hard for his victory over the Silverstone Tyres S13 of Mike Deane and finally it was the ever improving Volvo of Tommy McDonagh who brought the Top16 to a close with victory over the SR20 powered corolla of Alan Sinott. TOP 8 Japapeeds Baggsy faced off against the yellow S14.5 of Martin Ffrench in the first of the great 8 battles. The Wexican Motorsport S14 of Ffrenchy delivered consistently impressive runs which Baggsy could not match and the unanimous decision favoured the Irish driver. Alan Lenihan continued his solid run of form into the great 8 and although assisted by the mechanical problems of his opponent Danny Eyeles, took victory and the Hankook S13 moved into the semi finals. 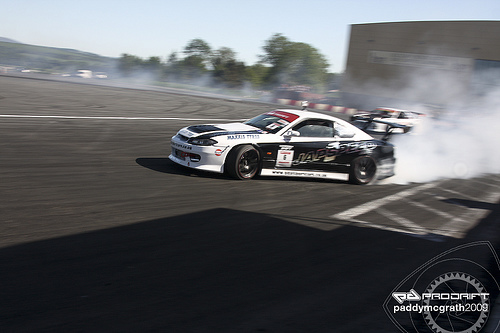 Wez Keating once again upped his performance against fellow Irish driver Dan Moorehead. Mistakes from Moorehead coupled with impressive runs from the purple WKD Nissan meant that Keating marched on to his place in the final four. Whilst battling for the remaining semi final position, Bon Bon suffered navigation problems as the Driftworks R32 drifted off-course thus surrendering an established lead and victory to the unlikely Punchestown hero of Tommy McDonagh in the big red Volvo. Final 4 Martin French and Alan Lenihan contested the first of the Punchestown Semi Finals; 2 drivers who are experienced with the pressures of the narrow end of a top 16 battle. Again Ffrenchy stepped up his performance. His exciting and aggressive lines close to the Punchestown barriers could not be matched by Lenihan and he won the unanimous favour of both the Prodrift judges and the Punchestown audience. Ffrench moved onto the final. 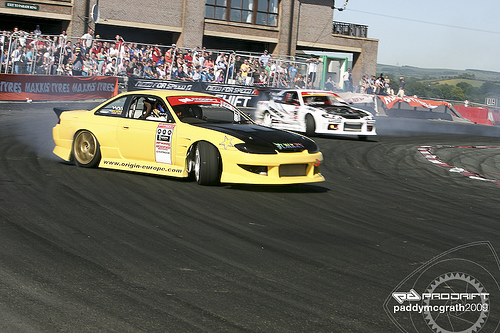 Wesley Keating and Tommy McDonagh was a much closer affair. A close run 1 with the Volvo leading left the decision finely balanced as both cars entered the course for the second pass. As both cars prepared to enter the final hairpin of the course the WKD Nissan 180 appeared to run wide and collided with the barriers causing substantial damage. McDonagh in the Volvo was through to the Final and Keating was forced to retire thus handing the consolation 3rd place battle to Alan Lenihan. FINAL In 2006 at the original Punchestown Competition, Martin Ffrench overcame a grid full of international drift stars to claim victory, today at Punchestown he faced a very different competitor as Tommy McDonagh drew alongside the Wexican S14 for Super Series glory. McDonagh typified the underdog heroics of Irish drifting and to be fair, his place in the final, although fortuitous (Bon Bon losing direction), was justified given his Superlap performance. The box body Volvo was more than able to master this course and for the final battle it was a case matching the consistent aggression of Martin Ffrench’s S14. Ffrench however was in no mood to surrender, evident by his continuous pressure on the rear quarter of McDonaghs Volvo whilst chasing. Whilst in front, Ffrenchy put down impeccable lines that the Volvo could not match. There was no need for a re-run. Ffrenchy had saved his best runs for last and enjoyed another unanimous decision in his favour and with that came the long overdue Prodrift victory in Ireland. 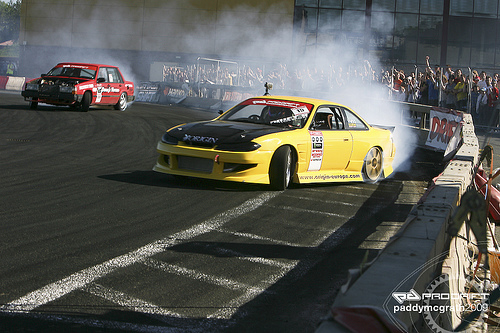 As the clouds of tyre dust settled on the Irish countryside, the Podium drivers reflected on what was an extraordinary day for the Prodrift Super Series. Martin Ffrench was quick to point out how the changes he made to gear ratios in the early hours of Sunday morning paid dividend and that the car returned for Sunday competition better equipped to handle the course. Tommy McDonagh explained that his Cosworth Engine was running new management for this event which added greatly to his Volvo’s performance and Alan Lenihan, content with his second consecutive Podium finish in the Super Series, now hopes to maintain his consistency as he challenges for outright victory in the 2009 Prodrift Super Series. 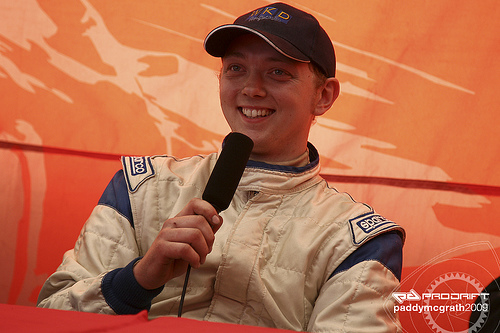